Hurricane Irma: I Evacuated and This is What it was Really Like

After the disaster that was Harvey, when my husband told me they were gathering donations to send to Houston, I was all about it. I quickly grabbed shoes, socks, and clothes to give (as he didn’t have a full list of what could be donated..ugh, men!) When I talked to my BFF and she said, “Be careful, you might need those when Irma comes to you,” I just laughed it off. However, it was all too real.

You see, the first week of September 2017 was one of watching, and waiting. Irma’s track flip-flopped from coast to coast each morning that week and finally, on Thursday, we made plans to book an AirBnb in Georgia, and flee the state the following day.

This was no easy decision. And actually leaving the place you live, as if you may never return, is an extremely unsettling, and disturbing feeling. And I, myself, am no lover of FL. The heat for most of the year is torture, and driving there is worse. Even so, I didn’t want a hurricane to decimate the state, just as much as I didn’t want to have to pick just a few small items to stuff in the car. But, we decided it was what we had to do.

Here’s a timeline of that Thursday and Friday:

9:00AM THURSDAY MORNING As a remote freelancer, I did what I could to finish out Thursday (until mid afternoon anyhow) as a “normal” workday. Though mid morning we booked the AirBnb to “escape” the storm, so that was definitely not part of a normal day at work for me.

3:00PM I began to “ready” our place. I stripped the walls, took down any and all decorations and turned around all dressers, and desks, towards the wall.

7:00PM Nick installed all the hurricane shutters on the windows, and on our patio doors. I pray you’ve never had to do this, the feeling is beyond eerie, and even with a peaceful, calm outside, nothing is more unnerving than not being able to look outside. Or for that matter, glancing outside just to see the metal shutters. **shiver**

11:00PM I officially was finished with the house prep and Nick was fast asleep. With an alarm set for 3:30AM the next day, I laid down, far from “sleepy.” The last time I looked at the clock, it read 12:45AM.

3:30 AM FRIDAY MORNING We were up, “packed,” and driving by 4:20AM.  With what we thought was a pretty good “head start,” we listened to Google and jumped on the closest freeway to our house, the turnpike.

ABOUT 6AM We drove for a solid couple hours or so, but then hit a literal wall of cars. We sat there, at a dead stop, for 20 minutes. I urged Nick to turn around and go back to 95N (altogether about a 20 minute “detour.” SO worth it, and saved us tons of time..though that may sound hard to believe.)

2:00PM We finally made it to the FL/GA border. This drive usually takes less than 6 hours.. this day it took almost 10.

2:25PM Average speed 15 MPH. According to “GPS and directions” we had less than  hours to go.

7:07PM I was texting with my MIL and told her we were still driving but almost there. Yes, this was constant travel from 4:20AM until 7:30PM, about 15 hours when it was all said and done.

We finally got there! The weather was 65 and comfortable, and we were so glad to get out of the car. But that day was scary. The rest stops were overflowing and backed up. The oasis’ were controlled by police and many were out of gas. The traffic was horrendous and slow and you saw broken down cars littering the side of the road. It looked like scenes from the Walking Dead, a show I love but never want to experience.

Irma is considered the biggest storm to come out of the Atlantic, and the evacuation of FL, the largest American evacuation in history. I wouldn’t wish that feeling or a day of driving like that on anyone. It was a truly terrible.

Deciding What to Bring, Almost as Hard as What to Leave Behind 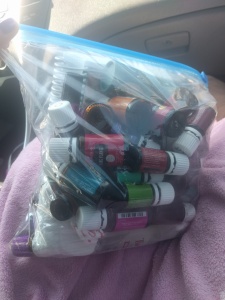 And what to bring? Ugh..this was sucky, too. Without kids or pets, Nick and I had only ourselves to think of. We each packed one suitcase, and each chose one “big thing.” His was his computers hard drive, mine was a tote of pictures. We brought a cooler with water, snacks, and other drinks. We had a bit more room so we both threw together a garbage bag, his had all clothes, mine was half clothes, half shoes.

Nick’s golf clubs came along for the ride and I brought my paperback books (the ones I’ve written and put into print,) as well as my essential, essential oils (of course!) That was pretty much it.

Could you (lightly) pack only a car, and leave your dwelling, possibly to return to rubble, without even a second thought? I thought and rethought about my choices many times.

So the storm hit hard in Miami and on the west coast, but certainly did damage to the east cost (where we’ve been living,) too. From our estimations, (and not knowing anyone in our complex,) our power was out for 5 or 6 whole days. We just got word last night, almost 7 days post evacuation, that our power was back on. With water restrictions, and a curfew, we have yet to go back.

We will return Sunday, and getting our place put back together will be no small feat. The temperature will easily be 90-100 degrees in the apartment and we have a fridge/freezer combo, and a standing freezer that will all need to be gutted, cleaned, and replenished.

For the Love of it All

Easily the best part of all of this? People loving people. People helping people. Whether evacuated, “hunkered down,” or friends and family back home, love was in the air. And it was beautiful.

The Life I Live

The Life I Live